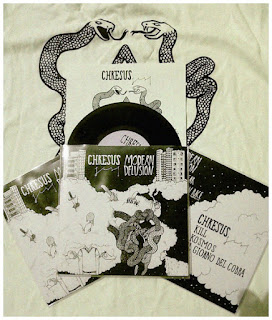 Yet another release from Doomtown Records. This was out last year in support of Modern Delusion's tour with Chresus Jist and limited to 300 copies.

Modern Delusion delivers three numb hymns in their traditional synth-punk/new wave style and this time the songs are even more darker and gloomier then on their debut “Wasteland” tape. If you like Lost Sounds, The Spits (minus the comic relief side) or Devo you’ll probably be into this trio.

This was sold out from the label but we restocked a very few copies from the band and you can get it here.  Also, if you like Modern Delusion make sure to check their highly praised debut tape. You can read recent write on Wasteland tape on Terminal Boredom here.

In the meantime, Modern Delusion managed to craft twelve memorable songs for their highly anticipated debut LP called Days of Us.

"Days of Us" captures bleak atmosphere and isolation caused by living in the big city on some shitty part of the world and the 4-track lo-fi production doesn't hurt either. Wide range of influences come from some classic synth punk sounds like Devo, The Screamers or Units and there's definitely some obvious influence from Yugoslavian post-punk/new wave scene and bands such as Paraf and some contemporary stuff not unlike Jay Reatard's Lost Sounds. But this is not straight up death rock, post-punk or goth revival band, Modern Delusion build up their own trademark sound with strong melancholic touch and vocals soaked in reverb backed up with punk attitude and primitive raw sound.

You can buy new Modern Delusion LP , Wasteland tape, split 7" with Chresus Jist and other Doomtown releases via Doomtown Records official store. If you’re interested in a wholesale deal get in touch via email here: doomtownrec@gmail.com

We still have some limited copies of Savageheads 7", Generacion Suicida 12", Warsong 12", Catholic Guilt 7″, Black Gust 7" and Divided Minds 7" available from our catalogue.