Portland's Arctic Flowers are totally into british anarcho post-punk and everything what was great about Corpus Christi collective, but yet, their songs seem incredibly fresh and not cliche. The band features punk veteran Stan (ex-Signal Lost) on guitar, Defect Defect's drummer and some crusties from Bog People \ Vivid Sekt. Demo was released sometime in 2010. and a few songs from these sessions were cut for a 7inch single. I think the band put this one out by themselves but I do know for sure you can get it from Feral Ward.

Also, there is a split 7inch with canadians Spectres out there. Spectres are also sharing passion for british anarcho punk as well as sometimes reinventing Warsaw \ Joy Division gloomy sounds. This split release is out on canadian Charged \ Distorted Rec. Beside this release, Spectres also did two other singles as well as the killer LP titled "Last Days" which is out on german Sabotage Rec. Oh, and there is a new Arctic Flowers release on a horizon. Hear one tune "Rising" here. This track reminds me of Signal Lost at their best moments. Can't wait to get this one on vinyl. :)

John Schooley And His One Man Band 7 Inches 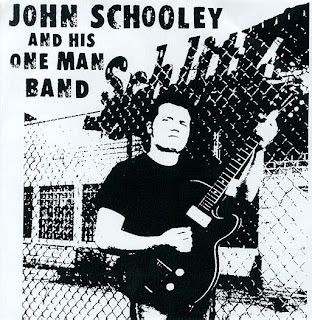 Hello world! New guy here, AKA M.M.. I don't know shit about the hipster stuff M. usually posts, so I'm going with these two raw and wild rocking 7 inches from John Schooley. Nowdays, he is mostly known for his Dr. Ross influenced blues mixed with garage/punk stuff published for Voodoo Rhythm, but this is nothing like that. These two gems, released for Goner and Ball records, are so primitive and loud that they are, besides Hasil Adkins and Dead Elvis stuff, my favorite one man band records ever. Goner 7'' comes with one Billy Childish and one Rick Derringer cover, but Ball 7'' delivers two original tunes. Both records are out of print, but you can still try eBay .
Download!
M.M.
2 comments: