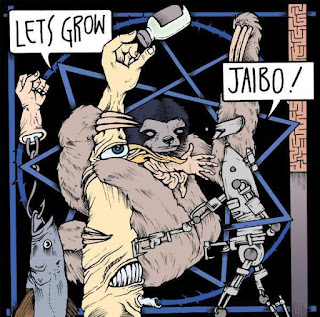 I wrote about Jaibo! and Lets Grow in my previous posts so i won't bother you with my words that much. I'll just copy\paste Sorry State and Maximum Rocknroll reviews and leave you the download link for the complete split 12":

Maximum Rocknroll review:
"I had sort of a weird mix up of expectations when listening to this new split of two Belgrade hardcore bands. I started off with the one I'm already familiar with, Lets Grow, and I was expecting some run-of-the-mill thrash-core since some stuff I've heard in the past didn't really floor me or anything. But then I raised an eyebrow and was like "Hold on...these new tracks are pretty freakin' killer"! These dudes capture the '84 fast-to-mid-paced sound just right, and the singer's voice is raspy but not over the top, swallowing nails shit. Man, I want to revisit some of the older stuff now 'cause maybe I wasn't in the right mood the first time around. The flipside belongs to Jaibo!, who I haven't heard before, but had high expectations for as I had seen other reviews comparing them to Jerry's Kids and Bad Brains! Those are two points of reference that should not be thrown around lightly. There are some similarities I suppose, as some tracks do sound like stuff from the Kill Kill Kill-era Jerry's Kids and the spastic and manic vocals mixed with high-speed guitar noodling does bring to mind a little Rock For Light; but they have their own thing going on even more. So even thought my initial anticipation was blown, I ended up listening to the whole side a second time, without any preconceived notions, and started to totally dig it. And then I flipped it over to hear Lets Grow again. Both bands tear it up!"

Sorry State review:
"Brand new split 12" from these two ripping European bands, both of who work vaguely in the tradition of bands like RKL and maybe even Animosity-era COC... in other words, this is no-bullshit HC that's not afraid to bring in rock or metal influences, but is never less than raging. Serbia's Let's Grow play mean-as-fuck, herky-jerky HC that definitely reminds me of the two aforementioned 80's bands, but with that extra passion that eastern European bands always seem to muster. As for their countrymen in Jaibo!, they work in a similar vein, playing aggressive but technical HC that recalls Rock for Light-era Bad Brains. Killer stuff!"

I still have 20 copies of split left so you can write me here for ordering infos. If you're from the States you can get your copy directly from Sorry State Records and Grave Mistake Records. And yeah, if you're interested in who did the awesome cover art for the record, it's a work of Ray Ahn from Hard-Ons.