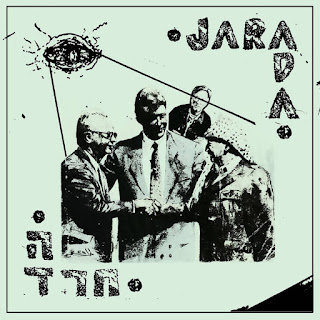 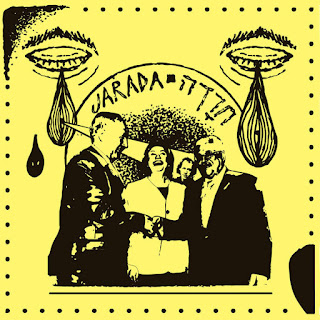 It's been ages since the last post and mostly all download links are dead but i'll try to fix that if there's any interest.

Well, life sucks and I don't have that much time lately but I wanna share this new releases I put out on my label Doomtown Records!

Jarada means anxiety in hebrew and this name perfectly captures the bleak sound the band is going for, in these thirteen tracks full of angry, chaotic and forceful hardcore sound!

As for the lyrics, the band was sick of boring, mostly apolitical music, sung in english, so they decided to remind the punks around the globe that punk is a political movement in every way and since the main source of frustration was the current situation in Israel there were no reasons to sing in another language except their own.

The band is heavily influenced by radical leftist and anarchist politics, political apathy in Israel and older Israeli bands such as Deir Yassin and Nekhei Naatza. Also, if you like Negative Approach guitar hooks or some recent hardcore punk bands like Repos or Los Crudos, Jarada will be right up your alley!"

"After a debut full-lenght record a year ago Jarada already crafted eight new brickwalls for a new one sided 12"!

This Israeli band from Tel Aviv continues to deliver angry, punching and chaotic music to the table, with some really bleak and negative overtones that are intertwined with hebrew lyrics that are mixture of personal thoughts with some politics thrown in!

Ma'agal Sina'a means "A Circle of Hate" in hebrew and is a natural follow up to the earlier S/T 12" and it deals with several issues which you can consider as "current events" from the past year and it also digs deeper into the emotional struggles and choices one needs to make to keep his or her shit together. On the one hand it may seem more cultural-political with songs like "Monopoly on Suffering" and "A Jewish State is a Circle of Hate" and on the other hand way more personal, with a self questioning and soul searching ("Riddance", "I Was in the Army").

As on the first record, you can expect fierceful vocals, chrushing hardcore riffs and plenty scraps of everything thats great about heavier side of punk music in the last decade."

P.S. There's bunch of new releases I put out that can be streamed on Doomtown's bandcamp. Make sure to check it out cause I think if you like most of the stuff i post here, you'll be heavily into it! Also, there's bunch of stuff distributed by Doomtown that you can buy from the store, links below.