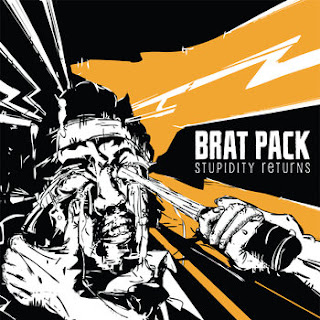 Brat Pack hail from Holland, but their sound is more reminiscent of the sunny streets, beaches, skate parks and pools of early eighties California. Influences vary from the aggressive sounds of RKL, SNFU, 7 Seconds and even some later era Poison Idea to a more melodic and gloomy approach of the Adolescents, D.I. and Agent Orange, played skilfully, but still really raw and pissed. Also, one song features the wicked Solomon of Night Fever fame on vocals. All in all, an energetic and melodic hardcore punk assault. And yeah, if you didn't know, Brat Pack members are also involved in almighty Citizens Patrol. This one is available directly through Doomtown Records, or you can also purchase it via Sorry State Rec. and Grave Mistake Rec., if you're from the States.

Also, Brat Pack are touring Europe once again. Make sure not to miss them if they're playing near your town. See the list od shows here.